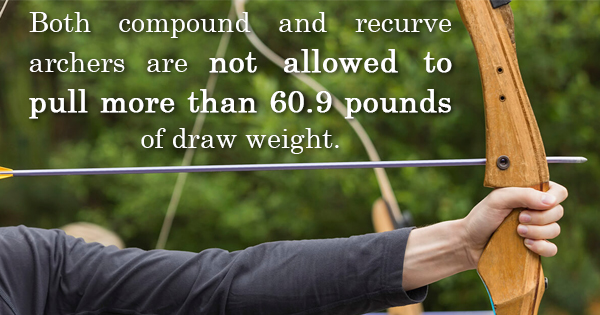 Training for archery in either discipline is an intense process, especially at high-level tournament competitions. Beyond the physical and mental rigor demanded of archers, the structure of tournament archery carries a lengthy tome of rules, regulations, and minutiae, things an archery training app won't teach you. Most people conjure thoughts on archery from mass media, but, in practice, archery at the professional level is much more particular than Robin Hood splitting an arrow to win a local tournament.

In this post, we'll look at some of the differences between compound and Olympic style archery as they're defined and practiced in internationally sanctioned outdoor tournaments. For referential ease, we'll be referring to Olympic style as recurve going forward.


This is the tip of the iceberg
Archery training goes far beyond the physical demands of the sport. Knowledge of the tournament process is just as important in the community as consistent practice, regardless of shooting discipline. If you're looking into archery training equipment, bow trainers, or even the iPhone bow mount for our archery training app, this much is certain: we'll get you in shape, but the only thing that's going to get you tournament ready is going to a tournament. Get out there and shoot some arrows. Just when you think you're good, sign up for a tournament and you'll see just how good good really is.